It’s hard to figure out to begin when recapping Necon, a unique conference in Portsmouth, RI oft likened to a summer camp for horror writers/readers/publishers. Do I start with my terrible performance in the Necon Olympics miniature golf event? My roommate Paul Tremblay? Dinners out with the likes of Nick Kaufmann, Alexa Antopol, Jonathan Lees, John Harvey, Ryan Wicke and Michael Rowe? How about when Erick Nunnally brought in his homemade picnic bread, a Rhode Island thing and possibly the greatest sandwich ever made? How about the panels, every one of them great? I moderated a panel discussing the weird with Laird Barron, Ken Vaughan, Todd Keisling, Victoria Dalpe and Nadia Bulkin – the discuss was one of many I’ve had on this topic and yet this group managed to take the weird into new territory. I bought a ton of books, including Ed Kurtz’s novelization of “The Ranger.” I also picked up an iron bottle opener shaped like a tentacle, hand made by blacksmith John Harvey. It was an exhausting, amazing weekend and I can’t wait until next year and Necon 40. If this genre is your thing, you owe it to yourself to attend Necon. 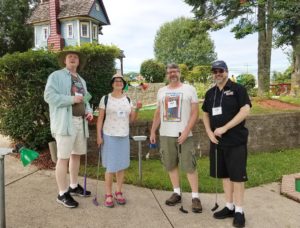