Posted at 13:34h in News, Upcoming Works by JFo 0 Comments

I’m absolutely delighted to be included in ChiZine’s tinsel draped horror anthology, War on Christmas. I’ve been participating in Yule celebrations for the past few years with the What Are You afraid Of? podcast by writing a short piece of Christmas horror, but was unable to join them in 2017, so my grim little tale of a tree farmer, “Yule Wine,” has found a home with ChiZine (some of the loveliest people in the biz). Here’s the great notice they sent out, including a stellar list of writers (Neil Gaiman, holy shit!) – and I’ve included the cover image at the bottom.

ChiZine Publications’ WAR ON CHRISTMAS anthology proceeds apace (more or less). Many acceptances have gone out, but there are still more to come. I love the acceptance letter we sent out, crafted with care by our own Craig Wolf:

Thank you for submitting to War on Christmas. It is with grim joy (!) that we thank you for signing up to fight in the glorious crusade against the tinseled imperialists in the form of “STORY NAME.” Your efforts were among the few that survived the rigors of basic training, and we look forward to joining you in fierce combat with the forces of Muzak and fake snow. 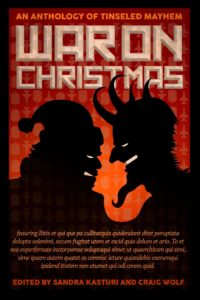